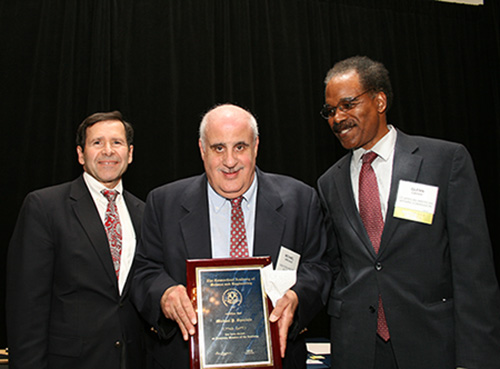 Michael P. Speciale was elected to Honorary Membership to recognize his 29 years as executive director of the New England Air Museum. His tenure began six years after the disastrous 1979 tornado which nearly destroyed the Museum. At that time the Museum had relocated to its current site and had a substantial mortgage on its only building with no cash reserves. Speciale overhauled the once-struggling Museum which now boasts an additional 62,000 square feet and nearly 60,000 annual visitors.

Speciale has helped to create new and innovative exhibits and has overseen the restoration of numerous aircraft through the years including the VS-44 Flying Boat, the A-26 Invader, the Sikorsky S-51 helicopter, and the B-29 Superfortress. He oversaw the construction of two new exhibit hangars, and with the assistance of the 58th Bomb Wing, created a hangar to preserve the history of these veterans and their accomplishments during World War II.

In addition, Speciale incorporated special events into the Museum’s programming, instituted a corporate partnership program, and created a weekend, school holiday, and summer program that makes Museum educators available to teach the public about the science of aviation. He oversaw the creation and funding of the SOAR for Science program which teaches students the concepts of flight through discussion, demonstration, and hands-on activity and reaches over 135 classrooms in Connecticut. While proud of the Museum’s accomplishments, Speciale is quick to credit his talented staff (4 full-time, 16 part-time) and a dedicated cadre of more than 150 volunteers.

A graduate of Fordham College, Speciale holds a master’s degree in social work from Fordham University’s School of Social Service and a master’s in public administration from the University of Hartford. Speciale began his career as a social worker for the Community Church of New York and went on to work for the Greater Hartford United Way and later the United Way Connecticut, where he helped to develop and was the first director of the statewide 211 Infoline program.