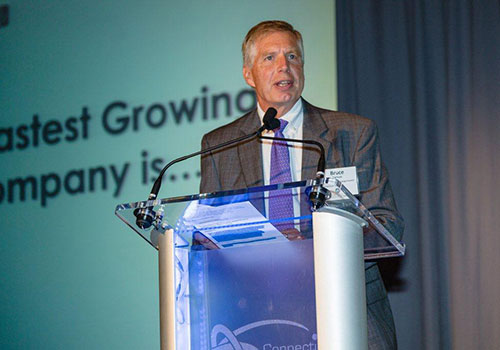 Bruce Carlson, President & CEO of the Connecticut Technology Council, was elected to Honorary Membership for leadership and contributions throughout his career that support the Academy’s vision to “foster an environment where scientific and technological creativity can thrive and contribute to Connecticut becoming a leading place in the country to live, work and produce for all its citizens …”

Carlson has served as an associate project director/manager for two CASE studies: Broadband Access and Availability (2011) and Workforce Development (2012). He was also Chief of Staff at the UConn Health Center when CASE conducted the UConn Health Center (UCHC) study (2008), where he was key in providing CASE access to UCHC information and staff throughout the study. He is the President and CEO of the Connecticut Technology Council, the state’s largest broad-based technology industry association, representing the over 2500 technology companies in Connecticut. He also serves as Chairman of The IP Factory, an organization he founded and which is dedicated to creating new companies and jobs through commercializing technologies that have been developed in mid-sized to large companies; and Managing Partner of Jigsaw Ventures, a strategic planning consultancy. During his tenure as UCHC’s Chief of Staff, Carlson established the university’s technology transfer program and held the position of Managing Director of the Office of Technology Commercialization.

Prior to UConn Health Center, Carlson served as Policy Development Director with the Connecticut Office of Policy and Management for two decades. During that time, he served four governors from three political parties, with a primary focus on economic development and budget-related issues. He holds a BA in History from UConn.