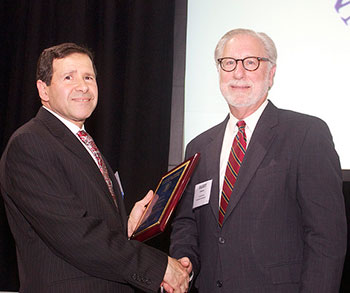 Elliot Ginsberg was elected to Honorary Membership in recognition of his accomplishments as President and CEO of CCAT, where he identifies and directs the formulation, implementation, and execution of innovative economic development tools and programs to promote the region’s technological capabilities.

CCAT offers a wide range of services to its diverse customer base by offering programs in technology, efficiency, and workforce development. CCAT addresses military and civilian advanced manufacturing needs, promotes energy planning and policy initiatives, and stimulates innovation and workforce development efforts. In addition, CCAT is actively involved in researching and field-testing how enhancements in lasers, computational modeling, and next-generation manufacturing can aid the competitive needs of the U.S. industry. For the past five years, CCAT has partnered with the Academy to sponsor the H. Joseph Gerber Medal of Excellence.

Under Ginsberg’s leadership, CCAT has made major achievements including:

Ginsberg is a member of the board of directors of Connecticut Technology Council, Capital Workforce Partners, MetroHartford Alliance, Oak Hill, Natick, and Hanscom Science and Technology Boards, St. Francis Hospital Foundation, Connecticut Landmarks, and Connecticut Legal Rights Project. He is a member of advisory boards for the NASA Space Grant Consortium, CT Regional Institute for the 21st Century, Charter Oak Cultural Center, Statewide Advanced Manufacturing Committee, Defense Technology Initiative, and the Connecticut Small Business Administration. He also is a member of the Connecticut Employment and Training Commission, the state Nanotechnology Council and the board of overseers for the Bushnell Center for the Performing Arts.