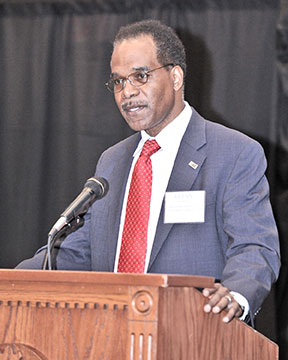 CPEP is a non-profit educational program that encourages underrepresented minority and female middle and high school students to pursue careers in science, technology, mathematics, and engineering. Under Cassis’ leadership, CPEP expanded from a single school district serving 43 students to 12 urban school districts serving more than 9,000 students. Through grants and proposals, he was responsible for increasing the annual budget from $20,000 to $1.4 million.

AAAC’s mission is to improve and promote the economic development, education, health, and political well-being of the African-American community in Connecticut, through advocacy, information sharing, cultural awareness, community networking, and influencing legislation. Since becoming Executive Director of AAAC, Cassis has remained active in STEM initiatives including serving on the Board of Directors of the Connecticut Academy for Education in Mathematics, Science and Technology until June 2011, as well as testifying before the General Assembly on STEM education issues. Additionally, he has led and coordinated KnowHowToGo and College Goal Sunday, two statewide college preparation initiatives targeting first-generation students.

A native of New York and a resident of Bloomfield, Cassis holds a bachelor’s degree in political science and a master’s degree in arts administration from the University of Connecticut. He also completed coursework in higher education administration at the University of Massachusetts (Amherst). He began his professional career as an administrator at Oakland University in Michigan and later served as Director of the Campus Center at Massachusetts College of Liberal Arts (formerly North Adams State College).

Cassis is active in several professional and nonprofit organizations, including the American Society of Engineering Educators, the Southern New England Association of Technical Professionals, the Education Advisory Board of the Urban League of Greater Hartford, past-president of the Connecticut Association of Education Opportunity Programs, vice-president of the Bloomfield Education Foundation, and treasurer for the National Association of Pre-College Directors. He has also served as a reviewer for the National Science Foundation and NASA.