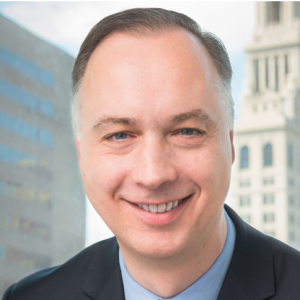 Matt Fleury was elected an honorary member of the Academy in recognition of his efforts in support of the Academy’s vision and mission. Specifically, he is honored for his activities that foster science and engineering education of the highest quality and promote interest in science and engineering on the part of the public, especially young people.

Matt has served as president and chief executive officer of the Connecticut Science Center since 2009, after serving as the center’s executive vice president and chief operating officer during the Center’s development. He helped to launch the science center in his prior capacity with the Capital Region Development Authority (then CCEDA). Previously, Matt served in management positions in communications and government affairs in the telecommunications industry after a career in broadcast journalism.

Additionally, Matt serves on the Connecticut Board of Regents for Higher Education. The board is the governing body for the Connecticut State Colleges and Universities. First appointed in 2011, he has supported its mission through various roles including chairman of the Finance & Infrastructure Committee, member of the Executive Committee, various presidential search committees, and now as the board’s chair. He was appointed chair by Governor Dannel P. Malloy in 2016 and reappointed by Gov. Ned Lamont for the second term in 2019.

Matt earned an MBA from the UCONN School of Business. He is also a graduate of Berkshire Community College and Charter Oak State College. He has studied organizational leadership at the Yale School of Management, and nonprofit performance and governance at the John F. Kennedy School of Government at Harvard. He and his wife call Connecticut home and are the proud parents of twin boys.