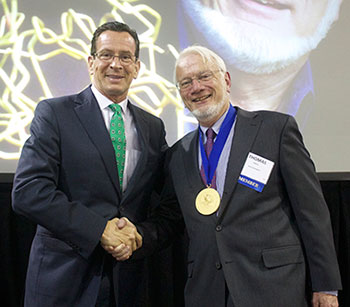 Curiosity is at the heart of all scientists, believes Professor Thomas A. Steitz. He recalls always wondering about what gives substances color and later, while a student at Lawrence College in Appleton, Wisconsin, he learned about the structure of molecules that produce color. Over the years, Professor Steitz’s curiosity led him to “want to understand how the structures of biological macromolecules can explain how they work,” opening the door to our current understanding of the mechanisms by which the proteins and nucleic acids involved in the central dogma of molecular biology carry  out  gene  expression, from replication and recombination of the DNA genome, to its transcription into mRNA, followed by the translation of mRNA into protein. Most recently, Professor Steitz’s work on the ribosome has led to the development of new classes of antibiotics to treat multiple-­‐drug resistant bacterial infections. Steitz, Sterling Professor of Molecular Biophysics and Biochemistry at Yale, is widely published and has earned numerous awards and recognitions including the 2009 Nobel Prize in Chemistry which he shared with Venkatraman Ramakrishnan and Ada Yonath. In 2001 Professor Steitz and his colleagues founded Rib-­‐X Pharmaceuticals, a company developing antibiotics to treat tuberculosis, methicillin-­‐resistant Staphylococcus,  and Escherichia coli. In 2013, Thomas A. Steitz is honored with the Connecticut Medal of Science.

Thomas Steitz was born in Milwaukee, Wisconsin, in 1940. His father was the head of personnel at the Milwaukee County Hospital while his mother stayed home to raise Thomas and his two younger brothers and two younger sisters. In junior high school, he became a serious saxophone player and even considered majoring in music; however, at Lawrence College, the influence of Professor Rober Rosenberg changed the course of events, helping Tom “understand the world around him because he introduced to us the concepts of atomic orbitals and bonding and how studying chemistry at the physical chemical atomic level allowed us to understand  the properties of chemicals.” Tom continued his education at Harvard University where, in 1966, he earned his PhD in biochemistry and molecular biology. After Harvard, he traveled to Cambridge, England, and worked in the Cambridge Laboratory of Molecular Biology (LMB), annually attending a week-­long meeting known as “Crick week” because “Francis [Crick] would sit in the front row and frequently ask many questions.” In 1970, Frederic Richards from Yale visited the LMB, and Tom asked if there might be a spot for him at Yale. There was. At Yale, Professor Steitz teamed with other faculty to form the Yale Center for Structural Biology, where his efforts focused on the study of the ribosome, “the major target of antibiotics.” Professor Steitz explains that the ribosomes are the binding site for 50% of the antibiotics used world-wide; however, because ribosomes mutate, a mutant ribosome can become resistant to antibiotics, requiring researchers to continuously develop new antibiotics. Professor Steitz is quick to point out that all the “intelligent design” that researchers produce cannot compete with the “evolution of bacteria.”  Fortunately, ribosome research “allows us to have more information to enable the design of antibiotics.” Professor Steitz is gravely concerned about the misuse of antibiotics and the potential worldwide catastrophe of drug-resistant bacteria.

Professor Steitz reflects that each of us wants to be remembered for doing good things and for being a good person. “I’ve had a lot of people in my lab who have gone on to do good things, and I hope they are happy for having been in my lab.” In particular, he would like to be remembered for the same qualities as Frederic Richards, the 1995 Connecticut Medal of Science Award, whom he sees as his hero. Fred Richards was “just an exemplary scientist, person and leader and we loved to follow him. I would like to be a Fred Richards who had the insight and wisdom to hire and cultivate other scientists.”