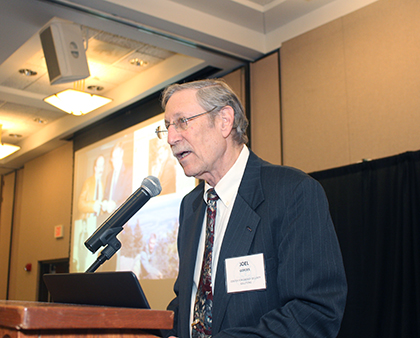 Joel Gordes, Director, Center for Energy Security Solutions, was elected to Honorary Membership for leadership and contributions throughout his career that support the Academy’s vision to “foster an environment in Connecticut where scientific and technological creativity can thrive and contribute to Connecticut becoming a leading place in the country to live, work and produce for all its citizens …”

Throughout his career, Gordes has been instrumental in promoting energy policy change in the public sector with a focus on emerging electric grid vulnerabilities and developing strategies for greater energy safety, resilience, and security. He has been Principal of Environmental Energy Solutions since 1995, an energy consultancy involved in multidisciplinary aspects of energy, environment, energy security, and economic development. More recently, he has served as Director of the Center for Energy Security Solutions. In those positions, he has served on numerous state boards and commissions including his appointment to the former Connecticut Energy Advisory Board (CEAB) in 2007, 2011, and 2013. He has also served for over 10 years as Technical Coordinator for the Energy Conservation Management Board, created by the state’s electric deregulation legislation. Gordes served as the CEAB designee to CASE for the academy’s Energy Assurance Planning Project. He has been a valued contributor to other CASE projects, serving as a study committee member for The Feasibility of Using Waste Heat from Central Power Stations, and Advances in Nuclear Power Technologies, as a study advisor for the Shared Clean Energy Facilities, and a committee member for the current study on Strategies to Minimize the Carbon Footprint of Connecticut Bus Operations.

A former state representative for the 62nd district (1987-91), Gordes served as Vice-Chair for the Energy & Public Utilities Committee. During his time in office, he authored or co-authored many energy-related public acts including bonus rates of return for utility energy efficiency programs and energy sections of Public Act 90-219, Connecticut’s first global warming act. During the 1990 budget deficit, he authored a bill that was unanimously passed to re-lamp state buildings with energy-efficient lighting that saved the state $130 million over a ten-year period.

A graduate of the U.S. Air Force Academy, Gordes flew 130 combat missions in Vietnam. He was drawn to the field of renewable energy and energy security after observing the effects of oil embargoes during the 1970s. Gordes studied solar energy at the Hartford Graduate Center of Rensselaer Polytechnic Institute and worked as a sales engineer for a renewable energy firm before moving to public service.

Gordes is the author of several papers on energy security, renewables, and distributed resources. He lives in West Hartford with his wife Lin.