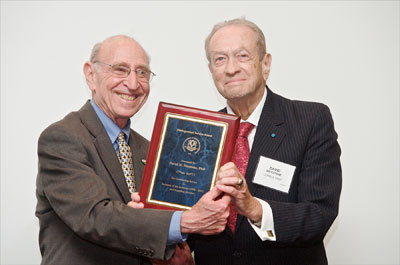 Founding member Dr. David M. Wetstone was honored with the first Distinguished Service Award in recognition of his many years of dedicated service to the Academy. Wetstone served as the first secretary of the Academy and functioned as chief operating officer from the Academy’s founding in 1976 until 2001. In 1966, Wetstone and fellow Connecticut Science Fair colleague Chuck Stroebel were discussing ways to support the Science Fair when they first conceived of the idea of a state science academy.  Ten years later in 1976, a Special Act creating the Academy was signed into law by then-Governor Ella Grasso.

In his 25 years overseeing Academy operations, Wetstone edited, published, and contributed to over 150 reports on science policy to the Connecticut legislative and executive branches and others.

From 1959 to 1975, Wetstone worked for United Aircraft Research Laboratories (now United Technologies Research Center), as a senior research scientist in plasma physics and later as a liaison with the U.S. academic research community.  In 1975, he began consulting in management information systems and data modeling and, later, in science-based public policy in other states.

A chemistry and physics graduate of the University of Connecticut, Wetstone earned his Ph.D. in physical chemistry from the Polytechnic Institute of Brooklyn. His memberships include the American Chemical Society, the American Physical Society, Sigma Xi, Scientific Research Society of America (RESA), of which he was the founder of the Hartford branch, and Phi Lambda Upsilon. From 1966 to 1976, he served on the Board of the Science Museum in West Hartford, with three years as Chairman, which included oversight of the construction and opening of the planetarium.