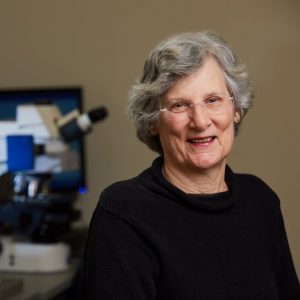 The Connecticut Medal of Science is the state’s highest honor for scientific achievement in fields crucial to Connecticut’s economic competitiveness and social well-being.

This award is bestowed by the state of Connecticut, with the assistance of the Connecticut Academy of Science and Engineering.

Nancy H. Ruddle, John Rodman Paul Professor Emerita, Epidemiology of Microbial Diseases and Immunobiology, Yale School of Public Health and Yale School of Medicine, has been selected as the 2021 recipient of the Connecticut Medal of Science.

Professor Ruddle is a pioneering immunologist who discovered lymphotoxin, an immune signaling molecule or cytokine, and demonstrated its roles and mechanisms in cytotoxicity, autoimmune diseases such as multiple sclerosis and Type 1 diabetes, and in lymph node development. Her work was fundamental to the understanding of tertiary lymphoid organs, accumulations of lymphoid cells that are damaging in autoimmunity but can be key to defense against microorganisms and tumors.

Professor Ruddle’s discoveries have profound implications for the understanding and treating of autoimmune diseases, organ transplantation, and cancer. Before the tools of molecular biology were available, she developed T cell clones and realized that the cytotoxic factor she discovered was a combination of the cytokines lymphotoxin and tumor necrosis factor (TNF). Lymphotoxin was one of the first cytokines to be discovered; now there are hundreds. Her findings that cytokines can induce apoptosis (programmed cell death) and contribute to autoimmune diseases changed thinking in the field.

“Connecticut has a rich history of being home to some of the nation’s leading scientists who are making revolutionary discoveries that have global impacts,” Governor Ned Lamont said. “Our state’s scientific community reflects our legacy of research and innovation. Professor Ruddle’s paradigm-shifting contributions to our understanding of the immune system, and infectious and autoimmune diseases is a shining example. On behalf of the entire state, I want to thank Professor Ruddle for her more than 50-year career — all of which has been spent in Connecticut — and congratulate her on receiving Connecticut’s highest honor for scientific achievement.”

Professor Ruddle earned a BA in Zoology from Mt. Holyoke College and a Ph.D. in Microbiology from Yale University. She received the Lifetime Achievement Award from the International Cytokine Society and was its President and has served as a role model for and made numerous contributions throughout her career to advancing women. Dr. Ruddle co-authored a textbook on Immunoepidemiology, the first textbook written on this subject. She has authored or co-authored over 200 publications, spanning primary research, reviews, and commentaries. Her publication on the crucial role of lymphotoxin in lymphoid organ development was chosen as a “Pillars in Immunology” paper in the Journal of the American Association of Immunologists and the paper led to a new field of study.