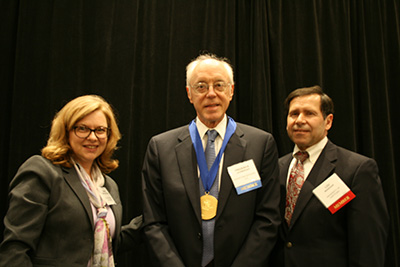 Frederick J. Leonberger was honored with the 2014 Connecticut Medal of Technology for his outstanding accomplishments in the field of photonics and fiber-­optics, primarily in the area of electro-­optic devices. Dr. Leonberger is Principal of EOvation Advisors, LLC, and retired Senior Vice President and Chief Technology Officer of JDS Uniphase Corporation.

For almost 40 years, Leonberger has been a leading contributor to his field not only in the development of a variety of important optical devices, but in product and business strategy, commercialization and overall company leadership. The integrated optical modulators he pioneered have been used pervasively for over 15 years to encode data at billions of bits per second in long-­haul fiber optic networks. Similar modulator devices are widely used to transmit CATV signals. These devices are manufactured in Bloomfield and that business has had a substantial economic impact on Connecticut (valued at more than $500 million).

In his early career with the MIT Lincoln Laboratory, Leonberger developed a breakthrough analog-­to-­digital converter device, which incorporated micron-­scale guided-­wave modulator integration on a single chip. He joined United Technologies Research Center (UTRC) in 1984 as manager of Photonics and Applied Physics. The major technologies developed in UTRC groups Leonberger led have all spawned commercial Connecticut businesses: United Technologies Photonics (UTP) in Bloomfield; CiDRA, in Wallingford; and DEOS, now part of Coherent, in Bloomfield. Aggregate revenue of these businesses over the past 15 years is estimated to exceed $1 billion.

In 1992, Leonberger co-­founded and became General Manager of UTP. In  1995, UTP was acquired by Uniphase Corporation and Leonberger went on to become Chief Technology Officer and Senior Vice President of that company and continued in that role after the Uniphase/JDS Fitel merger. He retired in 2003 and founded EOvation Technologies (now EOvation Advisors), a technology and business advisory firm serving photonics and laser companies. In addition to advising senior management teams, he presently serves on the Board of Directors of four private venture-­funded photonics companies.

A graduate of the University of Michigan, Leonberger holds a PhD in electrical engineering from MIT. He was elected to CASE in 1985 and to the National Academy of Engineering in 2000.