The Connecticut Invention Convention is a program that seeks to provide students in grades K-12 with a meaningful opportunity to develop and encourage creative thinking and invention. The Invention Convention program is designed to integrate all aspects of a student’s educational experience in an effort to solve real-life problems by understanding and using creative skills. The convention provides an opportunity for student inventors to participate in a friendly competition and to share their ideas with each other as well as adult inventors, engineers, patent attorneys and other professionals.

The Academy expects to recognize 15 middle school students from the Invention Convention finals.

JSHS is designed to challenge and engage students (grades 9-12) in science, technology, engineering, or mathematics. Individual students compete for scholarships and recognition by presenting the results of their original research efforts before a panel of judges and an audience of their peers. These symposia are effective in enhancing high school student motivation, stimulating original research, and providing the setting for exciting scientific meetings. Mature scientists have often expressed astonishment at the high level of student accomplishment. The National Association of Secondary School Principals has placed the JSHS program on the NASSP National Advisory List of Contests and Activities for 2019-2020.

The Academy recognizes the top five oral presenters and their respective schools. Each winner receives a $250 award, a certificate of recognition from the Academy, and their congressional representative; and the science department of the winner’s school receives a plaque and a $500 donation for supplies and equipment. Funding for the Academy’s awards is provided by Academy Member contributions.

The Connecticut Science and Engineering Fair, Urban School Challenge Program is designed to increase the participation and success of students in the fair from Connecticut’s priority districts. These students receive additional support through the program, including an opportunity to apply for $500 mini-grant support for transportation, laboratory equipment and/or supplies, field equipment, and display supplies and printing.

The Academy recognizes the Urban School Challenge – Middle School Winner. The student receives from the Academy a $250 award, a certificate of recognition from the Academy and their congressional representative; and the science department of the winner’s school receives a plaque and a $500 donation for supplies and equipment. Funding support for the program, including the student awards, is provided by Academy Member contributions, including donations to the Academy’s endowment fund. 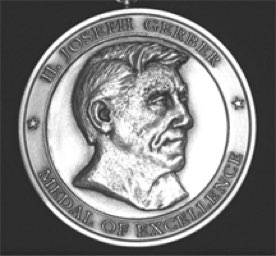 This award is in recognition of H. Joseph Gerber’s (1924-1996) technical leadership in inventing, developing, and commercializing manufacturing automation systems for a wide variety of industries worldwide. An elected member of the National of Science and Engineering, Mr. Gerber received the National Medal of Technology in 1994 followed by the Connecticut Medal of Technology in 1995.

Joe Gerber’s contributions to the technological capabilities of manufacturing were the result of a life grounded in genius and shaped by vision and determination. As an inventor and as founder, Chief Executive Officer, Chairman of the Board, and President of Gerber Scientific, Inc., Mr. Gerber was a leader for nearly half a century in inventing and producing factory automation equipment designed to solve global manufacturing problems.

Mr. Gerber shaped his companies and the industries they served with a vision—of increasing human potential through technology; of eliminating tedious, time-consuming manual tasks through automation that increases productivity; and of creating technology that directly and immediately revolutionized manufacturing for companies large and small. Today, Joe Gerber’s genius continues to dominate in the manufacture of apparel and flexible materials, signs and commercial graphics, and lenses for eyeglasses.

Mr. Gerber made the following comments upon his receipt of the National Medal of Technology in 1994: “This award is more than a symbol of personal achievement as it is the highlight of a long and productive career for me. It is an affirmation that manufacturing automation has enhanced every aspect of human life and profoundly impacted the standard of living of every person and nation in the world. I am only one of the many who have contributed to our nation’s rich technological heritage and one of the fortunate few to be recognized for his achievements.”

The H. Joseph Gerber Medal of Excellence is awarded to the winners of the Connecticut Science and Engineering Fair’s (CSEF) Life Sciences and Physical Sciences, and Urban School Challenge Senior Divisions. Each of the medalists received a solid silver medal. Additionally, all H. Joseph Gerber awardees received a $1,000 honorarium, certificates of recognition, and a biography entitled The Inventor’s Dilemma: The Remarkable Life of H. Joseph Gerber, which was written and autographed by his son, David Gerber. Each awardee’s high school is recognized with a commendation plaque and a $500 donation to its science department to further science and mathematics education from the Academy. Students also receive certificates of recognition from their US congressional representatives in recognition of their outstanding achievements.