East Hartford, CT —Craig M. Crews, the John C. Malone Professor of Molecular, Cellular, and Developmental Biology and Professor of Chemistry, Pharmacology, and Management at Yale University and the Connecticut Center for Advanced Technology (CCAT) have been selected as the 2022 recipients of the Connecticut Medal of Technology. The awardees will accept their medals at the 47th Annual Meeting of the Connecticut Academy of Science and Engineering, to be held virtually on May 26, 2022.

Craig Crews is awarded for pioneering research that launched the pharmaceutical field of Targeted Protein Degradation (TPD). TPD is hailed as a new paradigm for drug development and will almost certainly lead to novel therapeutics. Described as an exceptionally creative scientist, with an eagerness to ask piercing, mechanism-based questions, and a commitment to evidence-based, first-rate, definitive science, he has had a profound translational impact in drug development.

Combining his groundbreaking science with an entrepreneurial spirit, Crews and his colleague Raymond Deshaies co-founded Proteolix in 2003.  Proteolix developed a therapeutic treatment approved by the FDA in 2012 for relapsed multiple myeloma. Drug development is a slow and arduous process, and few technological advances are truly transformative in the field. However, for Crews, this was just one step in his journey.

Since 2001, he has developed a new technology, known as PROTACs, or Proteolysis Targeting Chimeras.  This innovative and potentially disruptive approach for inhibiting the function of disease-causing proteins is being commercialized in the biotechnology, New Haven-based, oncology-focused company Arvinas that he founded in 2013. The company has created more than 300 new jobs in New Haven with a $3.5B market cap, two drug candidates in clinical trials, and several partnerships with large pharmaceutical companies. Arvinas focuses on drugs to treat cancer, neurodegeneration, and other diseases [now in clinical trials for breast and prostate cancer].

Crews earned a BA in Chemistry from the University of Virginia, completed a research fellowship at the University of Tübingen (Germany), and received his PhD in biochemistry from Harvard University. His awards and honors are numerous, including the 2013 CURE Entrepreneur of the Year Award, 2014 Ehrlich Award for Medicinal Chemistry, 2015 Yale Cancer Center Translational Research Prize, a NIH R35 Outstanding Investigator Award (2015), elected a CASE Member (2015), the American Association for Cancer Research Award for Chemistry in Cancer Research (2017), Khorana Prize from the Royal Society of Chemistry (2018), Pierre Fabre Award for Therapeutic Innovation (2018), the Pharmacia-ASPET Award for Experimental Therapeutics (2019), the Heinrich Wieland Prize (2020) and the Scheele Prize (2021). 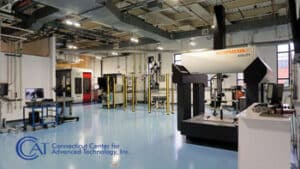 Connecticut Center for Advanced Technology (CCAT) is awarded the Connecticut Medal of Technology for its leadership of regional and national partnerships that assist the industrial base with the advancement of applied technologies and workforce initiatives to strengthen the global competitiveness of the manufacturing ecosystem in Connecticut.

CCAT, a non-profit incorporated in 2004, is a dynamic and innovative applied technology organization. An invaluable resource to the State, CCAT leads the promotion, demonstration, and adoption of applied technologies, particularly in the areas of modelbased engineering, Industry 4.0 and digital technologies, additive manufacturing, advanced composites, and renewable energy. CCAT’s industry-led approach and delivery of transformative solutions enables manufacturing and technology companies to improve the critical KPIs required to remain a profitable industry leader.

CCAT’s leadership in creating and administrating programs on the State and federal level has been a major multiplier for the Connecticut economy. Examples include: leveraging stimulus capital through matching grant voucher programs provided by the Manufacturing Innovation Fund; accelerating digital transformation through the Connecticut Defense Manufacturing Community Consortium’s Digital Model Initiative program; upskilling the manufacturing workforce and identifying the next generation of talent from underserved communities which have been supported by the National Fund for Workforce Solutions, Bill & Melinda Gates Foundation, the Federal Reserve Bank of Boston, the Deloitte Foundation and other private entities.

CCAT’s contributions, and that of its team, have been nationally recognized for developing innovative solutions to industry challenges, such as the President’s “E” Certificate for Export Service, presented by the Secretary of Commerce for significant contributions to the nation’s Export Expansion Program, the DoD Patriot Employer Award, and awards for community and professional leadership.

“Dr. Crews and CCAT are proof yet again of our state’s incredible science, technology, engineering, mathematics, and medical talent and resources. The awarding of these medals is a positive and gratifying reminder that even though our state is small demographically and geographically, we are a significant force as a global technology leader propelled by our research community, companies, skilled workforce, and a laser focus on accelerating long-lasting and equitable economic development in Connecticut,” Governor Ned Lamont said. “On behalf of the entire state, I want to thank Professor Crews and Ron Angelo and his team at CCAT for helping to make Connecticut the great state we know it is — and congratulate them both on receiving Connecticut’s highest honor for technological achievement.”

The Connecticut Medal of Technology is awarded to individuals, teams, and companies/non-profits or divisions of companies/non-profits for their outstanding contributions to the economic, environmental, and social well-being of Connecticut and the nation through the promotion of technology, technological innovation, or the development of the technological workforce. By highlighting the importance of technological innovation, the Medal also seeks to inspire future generations to prepare for and pursue technical careers to keep Connecticut and the nation at the forefront of global technology and economic leadership. Modeled after the National Medal of Technology and Innovation, this award is bestowed by the state of Connecticut by the direction of the Office of the Governor, with the assistance of the Connecticut Academy of Science and Engineering, in alternate years with the Connecticut Medal of Science.